The members of the Heritage Club of Government High School Ellaippatti, in one of their field visits the group of pupils were looking for stone inscriptions in their village. 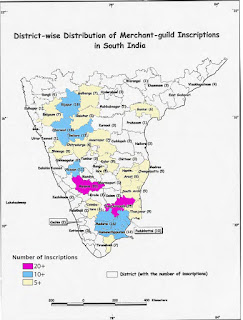 Poovarasan a member of the club has stumbled upon a rock with inscriptions. Their coordinator Kasthuri Rengan immediately informed the founder of Pudukkottai Archeological Research Forum, Manganoor A. Manikakandan. He along with the President Karu.Rajendran and members Muthukkumar, Kannan visited the field and found out the stone inscription belonged to 11th century.

It sung the praise of the  great itinerant trade associations merchant group called Thisaiyaarathu Ainootruvar. Manikandan and Karu Rajendran says that it is one the rarest find, it belongs to 11th century BC. In those days the merchants were treated parallel to kings. They enjoyed royal rights and had vast business area covering the entire East Asia. These merchants had a strong influence over the East Asian region. They had amicable relationship with most of the East Asian Kings. This kind of relationships made the merchants to serve as ambassadors between kindoms. Time of this new found pillar The new found stone pillar was bit ruined in some parts so there is no mention of the time, but the style of the scripture and praise of the merchant group confirms that it belongs to 11th century BC. It also mentions Rajendrachola the first, so it is considered to be inscribed on 11th century. The Size and Shape of the inscribed pillar. 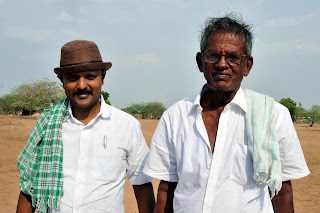 The stone pillar is 5 feet tall, and all the four sides and the top has inscriptions. At the top of the pillar an image of a scepter, an eagle, an arival(a weapon as well as tool), a concha and lamps are carved. The wordings “pazhiyali kallidaikkodi thalai” is inscribed. This is considered to be the honorary title given to Rajendra Chola the first himself. The inscription begins with “smastha buvanatha” and followed by seven lines of invocation to God. In the following lines the group of merchants introduce themselves as people of Goddess Shri Maheswari of Ayyappozhil. The next lines speaks of 18 heavily guarded port cities with moon reaching palaces and great roads, and 32 commercially important towns, and sixty four heavily guarded market places with ware houses. This indeed gives a spectacular past of the Tamil Marchant Groups, and their top notch organized operation and their influence over the rulers and people. 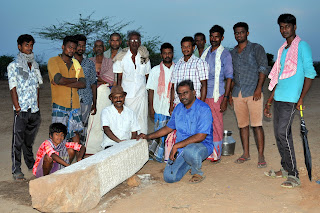 The Key members of the Group Further the inscription tells us about the members and their communal background, by the words Chetti Seerputhiran, Kavarai(Merchants), “kaasiyavan vidutha kaamunda suvami” (Landlord), “uruthiranthu vidutha olai vaaranu” (Accountants!) “seeriya sendvanum” made the group. The richness of the landscape also depicted in the inscription. Trees of Jack Fruit, Mango, Banana, along with betel tree, climbers like Mullai, infested with birds like cuckoos and parrots. The birds were merry without any pain, and in this wonderful land the Merchant Group held the scepter and ruled. The inscription also states about the security guards and generals of the merchant group. Their titles mentioned in the pillar are “eighteen flagger Lion (“pathinen kodi pasha veera singan”), Skirted Soldier, (“paavadai Veeran”) and Front Liner (“Kadipurathu Munai Veerar’). Among the above titles the title Lion is unique, as it is a very rare title in these kinds of merchant inscriptions. The forth side of the inscription was very damaged due to lack of awareness. For a very long time the pillar was used as a farm boundary stone, that too in horizontally. 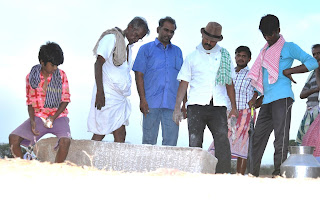 This position made the stone an attraction for the local cattle and the rubbed out the fourth side. It was sheer luck that the other there sides survived the test of time. There is a mention of Valangai Vallabars, a high command of this group had donated something to Sellukudi. 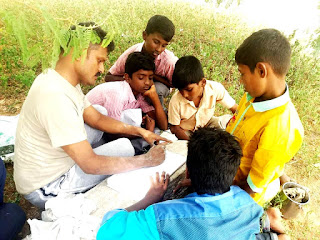 The name of the village is very clearly mentioned in the inscription. It is once called Selvikudi. The Merchant Group consist of people from all walks of life, it is organizational structure is awe inspiring as it consists of Merchants, Land Lords, Accountants, Guards, Soldiers, port cities, merchant towns, market places, and ware house with proper guards. This group shared its wealth for the public welfare and common good. In the ancient past there were several East Asian Merchant groups, but this Tamil Merchant Group is regarded as the best by Historians. They enjoyed privileges among kings of the Ancient Tamil, as well as with the East Asian Kings opined researchers Manikandan and Karu Rajendran.